Continuing our reading of Robert Greenleaf’s classic work, from a followership perspective… (this post continues the series in the place of ‘A Followership View of Servant Leadership: Chapter 7-B’)

Modern followership exploration is often attributed to Robert Kelley who published a few articles on the topic and produced The Power of Followership in 1992. He certainly was not the first to use the term (Eugene Habecker published in 1989 & 1990), but his work made the concept accessible and practical.

Robert Greenleaf’s book, Servant Leadership, was published in 1977—the 25th anniversary edition that I’m reading was also released in 1992. When I embarked on this series of reading through the lens of followership, I was completely unaware that, in Chapter 7 (“Servant Leadership in Churches”), I would come across a rather significant and specific exploration of ‘followership’. For all the impact his work has had on leadership thinking, it’s somewhat surprising to me that Greenleaf’s thoughts on followership have hardly ever surfaced—even in the contemporary works on followership that I’ve read. 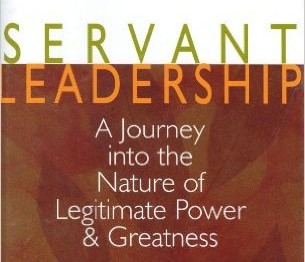 In the midst of other themes (see previous post), Greenleaf sprinkles in the ‘f-word’ a noticeable number of times. Perhaps it should be unsurprising that his work on servant leadership would include thoughts on followership: he refers to himself “as a student of organization, of how things get done” (p.237), and followers are a vital component of the achievements of any group.

I’ll offer here a listing of several quotations from this chapter, referencing followership and related notions, along with my brief commentary.

This statement contains two ideas prominent in modern followership writing (including my own): the universality of followership and the importance of choosing your leader. (This second notion is especially well-expressed by Jimmy Collins in Creative Followership.)

I especially appreciate here that Greenleaf gives such weight to preparation to lead: that followers should intentionally select their superior, and then engage (in part) in utilizing that season for their own personal and professional development, equipping themselves for ongoing (and perhaps increasing) influence and responsibility within the organization.

I dedicate an entire chapter (#19) to the notion that leaders, as fellow human beings, have flaws and gaps in their attributes and abilities. In Part I of Embracing Followership, I also pursue the misconception that some followers may have about themselves (or that leaders may have about followers) regarding personal inadequacy, lack of ability, which perhaps feels like a defining characteristic of those of us who are “just” followers (and apparently haven’t qualified to make it to leadership).

In this statement above, Greenleaf has succinctly stated the challenge and the beauty of our shared humanity. And, although he doesn’t make the overt connection, I cannot help but be drawn back to his various other statements on community (see Chapter 1-C & Ch 3) as both the remedy for the challenge of our limitation, and the most significant platform for the exercise of our giftedness.

Nearly every author on followership identifies the importance of leaders and followers (i.e. organizations) being united around a shared aim. Here, Greenleaf presents several other significant elements that accompany this sense of commonality: (1) an agreed approach or method to pursue the shared purpose; (2) a result of personal development for all involved; (3) a dynamic of both serving & being served by the group endeavor; (4) the necessity of significant commitment to see these optimal outcomes achieved.

Excellent. Each of these items is worthy of further contemplation and intentional implementation within our leadership-followership dynamics.

It’s astounding that, given how much influence Greenleaf’s thoughts on leadership have had, his accompanying weight toward followership was apparently ignored, yielding ongoing claims that “everyone talks about leadership, but no one talks about followership.” (This is a bit of a pet-peeve of mine; certainly some of us—you and I—are indeed talking about followership!) How dismayed he would be to find that, 42 years later, we’re only just recently starting to pick up on the importance of this second half of the essence of institution.

Here is just an inkling of the kind of commitment Greenleaf described earlier. It is a profound engagement, by followers and by leaders, with an aim to create an organization characterized by ‘beauty’ (which he’ll describe 65 pages later). Even without that definition yet, such a call feels lofty, simultaneously touching on the depth of personal calling and purpose and commitment and participation which I believe are essential for embracing excellent followership.

There is so much here that gives validity and honor to the role of follower. Taking risk. Empowering the leader. Trust. Needing to intentionally develop the skills in order to do such things in a way that contributes positively to the leader and to the organization. Defining obligations, and accepting them (see my Chapter 5).

And so, from the founder of servant leadership we have a strong advocacy for the importance of followership. As frequently as ‘servant leadership’ is used in contemporary training and development initiatives, I hope that our efforts of exploration and reflection with soon see the notion of embracing followership inextricably tied to the ideas of individual and organizational health and achievement.

A Followership Definition of Servant Leadership? 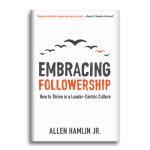 Embracing Followership: How to Thrive in a Leader-Centric Culture (by Allen Hamlin Jr; Feb 2016), and  A Discussion Guide for Teams & Small Groups (Dec 2017) —

along with our variety of free downloadable resources and the index of other posts on this site.

“Allen Hamlin writes on followership with an elevating language that imbues this form of relationship with service, grace, and individuality. A very welcome addition to the growing literature on followership.”

“I love Allen’s heart and the book God has grown out of who he is. He is right. We live in a ‘leader-driven culture’ where there is little focus on the spiritual integrity and dignity of ‘followership.’ Jesus called us to ‘follow Him,’ and the church is the strongest when together we follow Him and … END_OF_DOCUMENT_TOKEN_TO_BE_REPLACED

“Written as a response to the leader-centric culture we live in, Allen takes his readers through what he calls true followership and how we as a culture have skewed our view of what it means to be a follower and what it means to follow well. Ironically who I think this should be read by … END_OF_DOCUMENT_TOKEN_TO_BE_REPLACED

“I found Hamlin’s work to be interesting, deep and thought-provoking. I would read a paragraph and then quickly consider my own work and contemplate how the ideas related to my experiences. Then I’d go back and re-read!